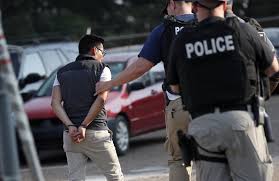 Last week ICE agents raided a chicken processing plant in Morton, Mississippi arresting 680 people for being in the country illegally. What took place is troubling in many regards and left me thinking about several questions.

I am not a law enforcement officer or in the military, but I am aware of the complicated line of following orders and disobeying orders when you know them to be wrong. This raid was wrong. Wrong to be conducted on the first day of school. Wrong to leave children abandoned. Wrong to point the finger and to blame others, particularly the ones with the least ability to defend themselves.

This raid made the news because it was so large and so disturbing.
I am sure there are smaller raids someplace each and every day.
I am sure parents are taken away never to see their children again.
I am sure, each day, children are left alone frightened beyond words.
I am sure, with each raid, communities are torn apart by what happens.
All this happens in my name.
Our name.
It is my fault.
It is our fault.
All this happens in my name.
I am ashamed.