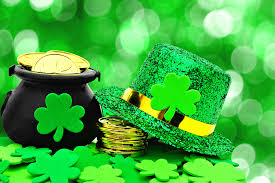 I know I am a day late.
But better late than never, right?
So….
Happy St. Patrick’s Day!
That day when you get…
To wear something green.
And, to drink green beer (or a Guinness).
And when a green river flows through downtown Chicago.

I am glad we can celebrate St. Patrick’s Day, but here is my back story.
When I was a little boy we never celebrated St. Patrick’s Day.
I never wore something green to school.
Why?
We were/are Protestants, not Roman Catholic.
In Northern Ireland, Roman Catholics wore green.
Protestant Irish wore orange.
Almost like gang colors so you would know who was who.
All of this is rooted in the sectarian violence which plagued Ireland until the Good Friday Agreement in 1998.
I am glad we are past all that.
I am glad we are past the hatred and discrimination which the Irish faced when the immigrated to this country. I am glad, for a day, we can all wear green and celebrate with parades, and for a moment all be Irish.

When that moment comes we will be that much closer to the world God intends.

Reading:
It was 1866 and the United States was recovering from the long and bloody Civil War between the North and the South. Surviving soldiers came home, some with missing limbs, and all with stories to tell. Henry Welles, a drugstore owner in Waterloo, New York, heard the stories and had an idea. He suggested that all the shops in town close for one day to honor the soldiers who were killed in the Civil War and were buried in the Waterloo cemetery. On the morning of May 5, the townspeople placed flowers, wreaths and crosses on the graves of the Northern soldiers in the cemetery. At about the same time, Retired Major General Jonathan A. Logan planned another ceremony, this time for the soldiers who survived the war. He led the veterans through town to the cemetery to decorate their comrades’ graves with flags. It was not a happy celebration, but a memorial. The townspeople called it Decoration Day.

Reflection:
I have to admit to mixed feelings about Memorial Day.
Tomorrow there will be a parade through the Village.
Complete with…
Fire trucks with lights flashing.
A band of some type.
Children on bikes or in wagons decorated with bunting and flags.
Accompanied by parents marching, riding, walking from Seminary Rd. to the Village Green.
The boy scouts will also be there and, maybe even a sports team or two.
Prizes will be awarded for the best decorated bike or wagon.
Then followed by a picnic at the Fire Department.
In between parade and picnic there will be speeches on the Green and a wreath placed in front of the flag pole and a 21 gun salute. In reading about Memorial Day and thinking about this morning, I was stuck the description of that first Decoration Day as not a happy celebration. How could it be. In 1866, or whatever the year, the names on the graves on which flowers or flags were placed were the names of their sons and their fathers and their next door neighbor. The human cost of the war just ended was both deeply personal and far too real.

Such a contrast between then and now.
Its a complicated balance for me between remembering and honoring on one hand and glorification on the other.
Remembering those who serve and have served our country in our armed forces.
Honoring those whose lives have been lost.
And, on the other hand sometimes seeming to glorifying war.
The truth is war is hell…for all involved.
Soldiers and civilians and families back home.
And, as I learned this week, between Post-traumatic Stress Disorder, alarming suicide rates and lack of support and care, for far too many in our veterans returning home coming home is also hell.

Tomorrow I will watch the parade.
I will listen to the speeches and allow silence to settle around me while Taps is played.
I will offer the Benediction at the end of the ceremony as I have been asked to do.
But it will be difficult to celebrate because my heart will be heavy.
Because war is hell and too many lives have already been lost.
And I will feel a sadness as well.
For with all our intelligence and all our wisdom we have yet to find a better way.

Reading:
With malice toward none, with charity for all, with firmness in the right as God gives us to see the right, let us strive on to finish the work we are in, to bind up the nation’s wounds, to care for him who shall have borne the battle and for his widow and his orphan, to do all which may achieve and cherish a just and lasting peace among ourselves and with all nations.
– Abraham Lincoln, Second Inaugural Address

Reflection:
On one hand words are cheap.
Particularly when they are used merely to rile or to pacify or to deflect or to blame.
Two pastors recently wrote a book entitled Never Pray Again.
Their thesis and the reason they wrote the book is that we should stop praying because too often our prayers are used as a substitute for action as in praying for peace as a substitute for working for peace. The same argument could be made about how words are used in other areas of our lives as well.

On the other hand words matter…deeply.
They can stir us and move us and inspire us.
And turn us in the direction of our best hopes and our bravest dreams.
As these words from 150 years ago still do for me spoken bt a President to a still divided country while the bloodiest war in our history still raged.

With malice towards none, with charity for all…let us strive to finish the work we are in, to bind up the nation’s wounds, to care for him, for his widows and orphans…to achieve a just and lasting peace.

Isn’t this still something of the dream.
Still who we want to be?
As a nation?
As a people?
As neighbors?
With malice towards none.
Charity for all.
Caring for those in need.
Building a just and lasting peace.
Isn’t it still what is needed?

So let us not stop here.
Cheapening these words by merely nodding our heads.
Instead, in whatever way we are able…
May we do our part to finish the work .

Reading:
Blessed are you, O God of the Universe,
for you have bound us together in a common life on this fragile planet.
We confess and offer before you our misconceptions, our hatred, our bigotry, and our deceit.
Grant us understanding that is grounded in love,
And reconciliation that grows out of humility,
And courage enough that we might remake our weapons of war into instruments of peace;
Not only for our sake, but for the sake of all your children.
And in doing so we will be known as children of God.
Open our hearts to the possibility of newness of your Covenant Word.
In the Name of the One God who is
Creator, Redeemer and Sanctifier,
World without end.
– adapted from a prayer by Martin Bell

Please understand…
Absolutely no disrespect is intended, but I think we need to rethink Memorial Day.

This morning, in the small town in Vermont where we have a home, my wife and I stood along Main Street to watch the Memorial Day parade – a small group of veterans carrying flags and fake guns, the high school marching band, several cars and a number of fire trucks from both the local and neighboring communities.  Then, along with many from the community, we gathered around the gazebo at a local park to listen to readings and prayers and remarks honoring the day.  I have been a part of many Memorial Day celebrations, often being one of the people asked to speak or pray, but this ceremony had a different feel maybe because, at least in recent years, most in our armed forces come from communities just like this.

But I walked away uneasy.
War is hell…literally.
And, sons and daughters, mothers and fathers, brothers and sisters who don’t come home leave a trail of broken hearts and lives that never completely heal.
Too easily on days like this…
And celebrations like this…
The parades we attend and the language we use, while making reference to those who have died, tends to glorify war.  Maybe we do so as a defense against how awful, Awful AWFUL war really is.

As I said…
I think we need to rethink what how we honor this day.
Instead of parades and bunting and bands, I think we should walk quietly through a cemetery and notice the flags and remember those who died and those whose lives were shattered by whatever war we remember and think about what we can do to build peace and to lessen the chance of the next war even happening.