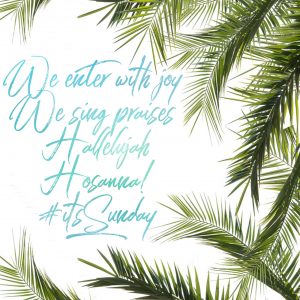 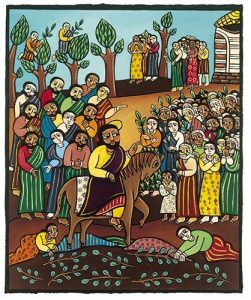 Help us to be there, O God.
At least as close as we can get.
Somewhere among the crowd who shout hosanna and wave their palm branches. Somewhere in that upper room as bread is broken and wine is poured and a meal is shared. Somewhere in that garden with it anguished prayer and sleepy disciples. To the betrayal and the denial and the trial before Pilate.
To the cross.

Forget for a moment what you know or think you know about today.
Or, what you think it might mean.
Forget the pageantry. The music. The palms. The familiar words and readings.
Forget all the “Hosannas” and “Blessed is the One who comes in the name of the Lord.”
Forget the idea of a “triumphal entry.”
For a moment, forget all that and focus on the reality of what took place that day.

After living and teaching and going from town to town in the region of Galilee among the fishermen and the farmers and all those who eked out a living each day talking to them about God’s Kingdom, where all had enough and all had a place, and included even…especially….the likes of them. And demonstrating through what he did and how treated others God’s love which embraced each and every one of them from outcast to sinner to sick to stranger. After being out there and with those, Jesus turns towards Jerusalem.
That great , holy city.
Built on a hill.
Surrounded by walls with gated and guarded entryways.
The seat of power.
Both religious and political.
Power which had a vested interest in maintaining the status quo and no qualms about eliminating any and all who threaten its rule. Roman crosses lined the roads. And, into the midst of all that comes Jesus.

At one of the most holy times of the Jewish year when Jews, not only from the surrounding countryside, but from across the Roman Empire made their way to Jerusalem for the Passover celebration. Each of them remembering and retelling and reclaiming that ancient story of the Israelites’ struggle against and eventual escape from slavery in Egypt. For those in power Passover was one of the most fearful and uncertain and unsettled times in Jerusalem. Everyone, from Passover pilgrims to the Roman overlords, lived each day on edge and on guard. In that mix of religious fervor and unsettled politics, Jesus mounts a donkey and rides into the city. “Hosanna. Blessed is the One who comes in the name of the Lord.”

Some of that understanding can be found there in the story.
It is not by chance,  the way the Gospel writers tell it, that all this took place during Passover. Let me remind you of the story of Passover. While slaves in Egypt, Moses instructed the Israelites to sacrifice a lamb and to spread the blood of the sacrifice above the doors of their home. Seeing the blood the angel of God passed over the homes of the Israelites, but in the homes of the Egyptians, without the blood above the door, the firstborn in their household from children to animals were destroyed (Exodus 12). The celebration of the Passover still involved sacrifice. The blood of the sacrifice, which represented the sins of the people, was poured on a lamb which was then driven out of the city and into the wilderness as a symbolic act of the sins of the people being cast out of their lives.
And, here was Jesus.
Passover. Jerusalem. Temple. Sacrifice.

I remember saying something like that a number of years ago when we had a 9:00 worship service in the Chapel Room where the time and format provided 10-15 minutes each Sunday to have a conversation about the sermon. One Sunday morning, Wally Doud, a long time member of BPC who had moved to Florida, was back for a visit. After my comment about sacrifice, Wally said, “Parents willingly sacrifice their children all the time. That is what so many parents did during the Second World War.” I didn’t know how to respond to his comment then. I don’t really know how to respond to that comment now, but my uncomfortableness with the notion of Jesus as God’s sacrifice remains.

So, if not that understanding of Jesus and this story, then what?
Maybe this.
As I was thinking and reading in preparation for this morning, one of the writers commenting on the account of Jesus’ entry into Jerusalem described it as an “acted out parable.” A parable, as you know, is a simple story told to illustrate a spiritual lesson or to teach some truth. Jesus was a master of parables.
The Good Samaritan.
The lost sheep.
Faith the size of a mustard seed.
Here, rather than telling a parable, Jesus was living it.
Embodying the truth he had been trying to teach.
Thinking about it this way, especially in Luke’s Gospel, Jesus’ entire life becomes a parable.
Illustrating a lesson. Presenting a choice.
One way of living vs. another way of living.
One set of values vs. another set of values.
The Kingdom of God vs. the power of Rome.
So here, as Jesus enters Jerusalem, the parable of his life continues to unfold. Up one road and through the gate on one side of the city comes Jesus. On the opposite side of the city and through another gate come the Roman authorities bent on keeping the peace. Jesus on a donkey which is what one road when coming in peace. Rome on horses to demonstrate their power. Those welcoming Jesus waved branches they cut. On the other side of the city the royal banners were unfurled. And, those who went ahead of Jesus and those who followed behind shouted, “Hosanna” which means “God save us” or “God saves” which meant turning one’s life towards the Kingdom of God rather than bowing and submitting to power of Rome.

As you know, the story continues to unfold in the days to come.
Upper room and Last Supper.
Praying in the garden.
Arrest. Betrayal. Trial. Crucifixion.
And, we are left to ponder…
What lesson is here for us to learn? For good reason, O God, our prayers often start close to home.
For those whom we know.
Those whom we love.
Those whose lives are intimately intertwined with our own.
A fraction of whose names we can say out loud.
Countless others fill and sometimes break our hearts.
We remember all of them now calling on that which we know of You and Your abiding presence and surrounding their lives with all the love and hope and strength and support we can muster. And so we pray, O God.

And pushing our lives and prayers further, we remember all those places into which Jesus rides today, not with grand procession and triumphant shouts, but often unnoticed or unnamed, but present still.
Damascus.
Gaza.
Barcelona.
Dusseldorf.
Damasak.
Tikrit.
If only they knew those things that make for peace, O God.
If only we knew those things, O God.
And so we pray.
Not alone, but together as Your people gathered in this place.
For health.
For hope.
For comfort.
For peace.
Amen. Christmas is easy.
Away in the Manger.
Silent Night. Holy night.
Holy Week is hard.
My head understands the events of that take place.
Triumphant entry.
Confrontation in the Temple.
Crowds gathered to hear Jesus speak.
Celebrating the Passover.
God-awful crucifixion.
But while my head understands, my heart rebels.
I tiptoe towards the edge of the story, but then turn away.
I dare not get too close to the anguish and the betrayal and absolute brutality.
And, that only gets me to Friday.
Who really understands resurrection?
(Even though they have made a TV show about it.)
How do you put words around mystery?
Or, words around an experience which takes your breath away?