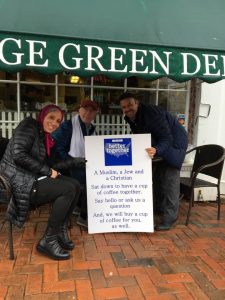 Taking our lead from the Interfaith Youth Core, three of us – a Muslim, a Jew and a Christian – sat down at one of the tables in front of the local deli extending the invitation for those who came to the deli for lunch or who were walking through the Village to stop and to say hello. In exchange for saying hello, we offered to buy them a cup of coffee. Then, we ask them “Why are we better together.” Here is what some of them shared with us:

All this from two hours, on a cool spring day, sitting in front of a deli introducing ourselves to neighbors and asking a simple question.

Why are we better together?
What would you add to our list? I missed it.
April 7th.
Better Together Day.
A day sponsored and supported by the Interfaith Youth Core on which 5000 people from across the country took a few moments to talk with each other about their religious and non-religious worldviews, to share their values and to learn from each other.

Better together.
What a novel idea.
As is talking to one another and listening to one another and learning from one another. In a culture and a political climate which does everything in its power to pit you against me and us against them, listening to someone else becomes a counter-cultural act because the moment I put a name and face on the other, the harder it is to swallow the rhetoric or revert to inaccurate stereotypes. In the end I still may not agree, but if I listen well I may, at least, begin to understand.

I already have the April 7th  on my 2017 calendar.
And a game plan in mind.
Table at the local deli down the street.
Joined by a friend who is a Rabbi and another friend who is Muslim.
A free cup of coffee for whoever will sit for a moment and talk with us.
And, then see what happens.
I bet it will be great.
Because, after all, despite what they tell you we are better together.

P.S. And these thank yous for those who have helped me be better…

Thank you.
I am who I am because of who we are together.