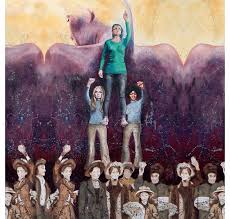 Sometime this past week, on my social media feed, I saw a drawing of John Lewis. His caricature took up most of the frame and on his shoulders were three smaller figures each one holding a single piece of paper with a letter on it. B. L. M. The reference was and is obvious. The person who made the drawing was referencing that the Black Lives Movement stands on the shoulders of John Lewis and so many others who struggled and worked and, for some, gave their lives for racial equality in our country.

Seeing that image, I began to think of the shoulders on which I stand.
Those who shaped me and encouraged me and, without whom, I would not be who I am or where I am today.
My parents.
Richard Bell.
John David Burton.
Ross Ludeman.
Sister Pauline.
There are others.
Countless others whose example and encouragement gave me the courage to step forward and to speak up and to do the work which was before me to do.

But I wonder…
Rather than just admiring them from afar…
John Lewis
William Sloan Coffin
Malala Yousafzai
Eleanor Roosevelt
(Add your own names to this list!)
What if I began to see myself as standing on their shoulders.
That who I am and can be is because of who they were and are.
That the work I am to do is to continue to stretch for that which was just beyond their reach?

If that were so
If they are the shoulders on which I stand
Would I view my life differently?
Would I understand my responsibility in a new way?
As I said…
I wonder.