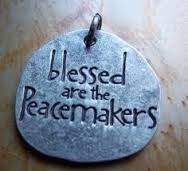 I know I am not on your radar screen.
Or your email distribution lists.
Or your social media feeds.
Even if I was I am not important enough or influential enough to catch your attention.
But I am a Christian.
And, a pastor.
I have been both most of my life.
And, I have done and do my best to take the Bible seriously and to follow in the way and the spirit of Jesus.

We differ on many issues.
Abortion.
The death penalty.
The way we treat immigrants.
Our fellow Christians and community members who are  LGBTQ.
Even on how we read and understand the Bible.
I get that.
I don’t know what to do about that other than to live out the values of my faith in the best way I know how.
But….
And, here is my question.
How do we understand and live the statement of Jesus:
Blessed are the peacemakers for they shall be called the children of God.

You were at the White House dinner the other evening.
I was not.
The President said that if those who were more liberal than you were elected violence would be the result. He and others are now walking back on that statement trying to say, “This is what the President really meant…” What I need to hear from you is not your trying to explain what the President meant or did not mean when he said that. What I need to hear from you is that violence as a way to resolve issues is not a part of the values of our faith. Whether is the violence of those associated with the antifa movement or the violence of the KKK and white supremists movement or the violence of those whose response to anything which threatens them is to pick up their gun. I need to you stand up and to speak up and to say, “This is wrong. This is not who we are or who we are called to be as People of Faith.”

But, you are not saying that are you?
Here is the price we will both pay.
Those outside the Christian community who are trying to understand who we are and what we value and if and how that might fit in their lives;
Those who look at the violence on the left and the violence on the right and turn their back on both;
All those people are going to hear your silence and never hear my voice and turn away.
Forever.