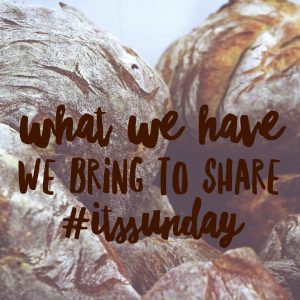 Last week, after a full and wonderful Easter Sunday morning, I went home and took a nap. After sleeping for an hour or so, I woke up to the realization that another Sunday was just around the corner. A Sunday which, with all my focus on Holy Week and on being ready for Easter, I had not given a moment’s thought to. So, on Monday morning scrambling to catch up, I put my boots on and made my way to the church through the snow. At my desk I flipped through my file folder of notes and scraps of paper looking for some spark of inspiration. Something which connected with the Sunday after Easter and which both caught my attention and tugged at my heart which is the only way I know to write and preach sermons.

What I found was this.
Scribbled sometime in the past on a scrap of paper.
Loaves and fishes. Not much. What the little boy had.
That note sent me flipping through my Bible to find the story. You can also find the story in Matthew, but John’s Gospel tells the story this way.

After this Jesus went to the other side of the Sea of Galilee, also called the Sea of Tiberias. A large crowd kept following him, because they saw the signs that he was doing for the sick. Jesus went up the mountain and sat down there with his disciples. Now the Passover, the festival of the Jews, was near. When he looked up and saw a large crowd coming toward him, Jesus said to Philip, “Where are we to buy bread for these people to eat?” He said this to test him, for he himself knew what he was going to do. Philip answered him, “Six months’ wages would not buy enough bread for each of them to get a little.” One of his disciples, Andrew, Simon Peter’s brother, said to him, “There is a boy here who has five barley loaves and two fish. But what are they among so many people?” Jesus said, “Make the people sit down.” Now there was a great deal of grass in the place; so they sat down, about five thousand in all. Then Jesus took the loaves, and when he had given thanks, he distributed them to those who were seated; so also the fish, as much as they wanted. When they were satisfied, he told his disciples, “Gather up the fragments left over, so that nothing may be lost.” So they gathered them up, and from the fragments of the five barley loaves, left by those who had eaten, they filled twelve baskets. When the people saw the sign that he had done, they began to say, “This is indeed the prophet who is to come into the world.”

Most of the time when we hear or read this story the focus is on Jesus and the size of the crowd and how there was not just enough food, but when all was said and done there was food left over. And, we are left to think about and marvel at how that all happened. But my scribbled note was not about the size of the crowd or about Jesus or about how it might have happened. My note was about the little boy and his five loaves of bread and his two fish. I don’t know whether, for him, that was a lot of food or not much. Was the five loaves and two fish enough to feed his family for the day or for several days or for the week? But it is what he had. And, what he had, he shared.

I can imagine the situation.
And, the naivete.
Most of us who have had children or been around young children have probably experienced something similar. Adults wrestling with an adult sized problem. A child over hearing what was being discussed and offering to help with what she has.
Her toy.
Her quarter.
Sharing her sandwich.
Sweet, but so insignificant when compared to the need or to the challenge at hand. Except here. In this story.
Here, two fish and five loaves…
What the little boy had and offered…
In a crowd of 5000 men, women, children, grandfathers and grandmothers, uncles, aunts and cousins.
Here, two fish and five loaves was enough.

And, I am weary because I believe I am to be a part of helping to make them different.
Making them better.
Making them just a bit closer to what I think God intends.
Making  them safer so children don’t have to be afraid in school or black families don’t have to have the conversation with their sons, which I never had to have with mine, about how they are to act when approached by the police.
I am weary.
And right now I feel I don’t have much to bring to the table.
How about you?

So, is it grace?
Or, hope?
Or, reminder?
Or, encouragement?
Or, promise?
Or call?
That two fish and five loaves of bread are not only enough, but more than enough.