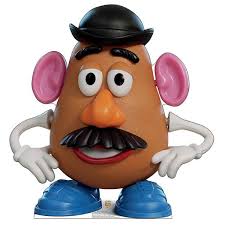 But what I want to write about it not Mr. Potato Head or now just Potato Head.
That news made a much better title and attention getting intro, and ties in (sort of) with this.
Commercials.
You see, I watch commercials.
Less now than before when I was responsible for having something thoughtful to share with people every Sunday. But I still pay attention. Not because I want to buy anything, but because commercials provide an insight to trends which are happening in the culture around us. I figure those who put all the time and money into producing commercials meant to grab our attention have access to information and data that I will never have. Some of the commercials I get. Like all the commercials for different types of medicine targeted towards people like me who are getting older. And, some of them I watch and just shake my head. In those moments I am reminded of a conversation I had a number of years ago with a marketing executive. When I made a comment about a commercial I did not understand he replied, “It is not meant for you.”

All this comes with a couple disclaimers and one observation.
Disclaimer #1:
My observation is just that. My observation. No data. No counting. Just my impression.
Disclaimer #2:
I don’t watch Fox News.
For a number of years I tried, but it became too crazy and I couldn’t take it anymore.
So this does not take into account any commercials from the My Pillow Guy or others who advertise on that station.
Observation:
If I am correct about the change in commercials, I think the change is not meant for me.
I am not the targeted audience.
The targeted audience are those much younger than me.
My children and their peers who have a very different world view and understanding of the world than I did when I was their age. The commercials I notice is their “normal” for which I am very grateful.

It may be rough to get from here to there.
And, we may have to hang on by our fingernails.
But if we do…
If we do…
The world may just end up being a better place for all.