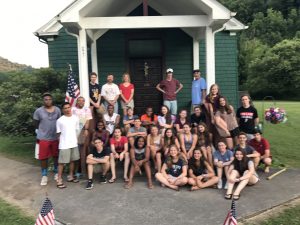 Well, I am home again.
Back from our summer work trip to Colcord, WV.
27 high school students.
5 other adults.
2 porches built.
1 deck and walkway built.
1 floor replaced.
2 roofs painted with Kool Seal.
A week later.
Rested enough that I can begin to think and to write and to get on with the rest of my summer “To Do” list.

I was anxious before I left. The political climate in our country has widened the gap between the part of New York where I live and West Virginia where we lived and worked for the week.
So, how was it?
Here are several reflections:

But, all was not easy.
There were moments to pay attention to and lessons to be learned.

We will go back.
We are already making plans for next summer.
Relationships grow slowly over time.
And, with relationships, understanding.