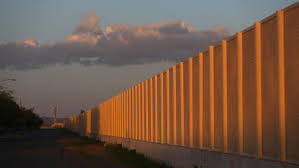 What started out as a rhetorical device has hardened into an actual concrete or steel wall. With that transformation, President Trump has backed us into a corner. It’s hard to imagine that the wall, as envisioned by the President, could work. Resourceful and desperate people would find a way over, under, around or through whatever type of wall we spend the money to build. And that doesn’t begin to take into account the geographic and ecological issues in play in building a wall. Or the fact that, at least some of the land where the wall would go is privately owned.

While President Trump created current problem, the larger fault lies with Congress who has refused or avoided dealing honestly and openly and in a bi-partisan fashion with the whole issue of immigration reform…for nearly 20 years (and maybe even longer than that). And, only Congress can fix it. To move us forward it cannot be the Democrats in the House coming up with a plan and passing it without Republican input and ideas and votes. In the Senate, it cannot be the Republicans meeting in a room by themselves and writing a bill and passing it without Democratic input and ideas and votes. Immigration reform will require bi-partisanship and leadership and courage which right now appears to be in short supply in Washington.

I am neither a politician or a historian, but I do pay attention and I do follow the news and, over the last 20 + years, have spent time in Central America. Here is my list of what needs to be included in comprehensive immigration reform. I am sure the list of issues and concerns is longer than this, but maybe this is a place to begin.

Please, Congress, be courageous enough to do your job.
Together.