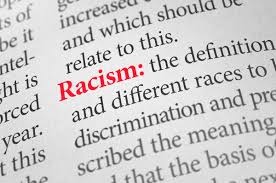 The latest headlines continue to be about Virginia’s governor, Ralph Northam, whose black face picture in a yearbook and efforts to explain it has erupted in a political firestorm. Then there is Mark Herring, Virginia’s Attorney General who did something similar. And what about the school celebrating Black History Month who had all the students make a paper plate blackface mask for the school program. Or, the Starbucks and the hotel where employees called the police on a black patron in their establishment. Or, the student who calls campus security because a fellow student who was black fell asleep on the couch in the common area.

I am not a racist, but…
My hunch is most of us would say we are not racists.
Why we have many friends who are black (or Asian or Latino).
What we miss is that even while that may be true, we participate in and support, sometimes tacitly other times overtly, systems and structures and a world view which are racist. Which maintain the racism woven so tightly into the fabric and history of our country that, those of us who are white, don’t even know it is there. I may be just parsing words here. I do not think of myself as a racist, but I am a privileged part of the racism which is rampant all around me.

In the long run, dealing with the racists may be the easy part.
We can see them.
Name them.
Point our fingers at them.
Tell ourselves we are not like them.
Tell ourselves we are not them and so let ourselves off the hook.
What is hard…
Much harder…
Is seeing and naming the racism all around us.
The racism in which we participate each and every day. The racism from which most of us benefit. From our schools to our churches to places of employment to the criminal justice system to our system of government.
Until we grapple with that….

Governor Northam, put on blackface, dressed up as Michael Jackson and learned to do the moonwalk. All in fun. Right? But, completely ignorant of the history of blackface and blind to how what he did would be perceived and make those who were not white feel. And how what he did reinforced a perception of reality which lifted some up and pushed others down.