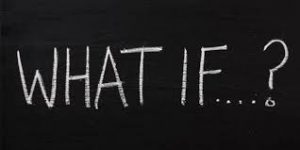 What if every time the President called someone a name, all the news channels cut to something else. Someone doing something positive to address the issues and concerns which face us.

What if every time the President said something that was clearly not true, the news channels cut to a different political leader responsibly discussing an issue.

What if every time those who speak for the President dismiss legitimate questions or blame someone else we all turn the station or the page or just walk away.

What if we just quit feeding the frenzy or participating in the craziness?

I know.
The stakes are high.
And, I don’t know what the balance is.
But is it news when the President makes fun of people or calls other people names or intentionally says what is not true or has all this become more a soap opera?

Years ago, I had the privilege of serving as President of our local Board of Education. There were three or four people who at each meeting got up to “air their criticisms and critiques of the decisions we were making.” They often did so in a derogatory fashion which included calling us and school administrators names. After a while I told them they were free to express whatever opinions they would like, but if and when they began to use language which we would not allow students to use I would cut off the microphone and and the video and stop the meeting. They didn’t believe me until I did it. After several meetings, they got the message.