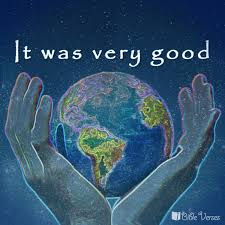 For tomorrow (Sunday) I have written my Sunday morning reflection based on Genesis 1, the opening verses to Hebrew Scripture and the Christian Bible. For me, those words are more a Statement of Faith than a description of how the world came into being.

We all know the world is not good.
Bad things happen.
Awful things happen.
The news that lands on our doorsteps or fills our social media feeds makes its money telling us how awful the world is and how bad people are. If that is all there is or how it is as some (maybe correctly) say, then me first/mine first/survival of the fittest would be the only reasonable response.

Let me begin this morning with a couple of assumptions.
You may or may not agree with them, but at least you will know where I am coming from.

Maybe I should just stop there and let all that sink in a bit or allow some time for questions or comments or even debate, but there is a bit more I would like to share with you this morning.
So, here we go.

Some of you may remember from this past fall my idea for periodic reflections about signposts or markers that help us find our way on our journey of faith.  I came up with the idea this past summer while I was hiking on the Long Trail in Vermont, a trail  which runs from the Vermont/Massachusetts border to the Vermont/Canadian border. Right now I am a few miles shy of being half way done.  The trail is marked by 2 inch by 3 inch white marks on trees usually located a couple hundred yards apart. While most of the time the trail is fairly obvious there are times when it is only those white blazes on the trees that confirm you are still on the path. As you can imagine, hiking 8-10 hours a day provides ample time to think. While hiking, this past summer I realized faith, at least my journey of faith, is more like a hike in the woods with more roots and rocks and up and down than it is a walk in the park.  If that is true then what, I wondered, are the markers we should be looking for to help us find our way and to not get lost.

Here is a bit of background about this passage from the Bible.
Despite popular perceptions to the contrary, this passage is not primarily about creation.
The core message is not about God creating the world in six days and resting on the seventh.
And, it is not written as a pie in the sky, Pollyanna, everything is nice and sweet and will be okay if you just trust God point of view. It was, in fact, written at a time of deep political and spiritual crisis for the Jewish people. Then it was inserted as the Prologue to Hebrew Scripture; the starting point from which you should read and understand the rest of the story.
Here is the back story to Genesis 1:
The Jewish people believed they were God’s chosen people.
That God had made a special covenant/a special promise with them.
And there were tangible signs that confirmed that covenant:
The Ark of the Covenant which held the tablets of the 10 Commandments.
The Promised Land.  The land they believed God had given to them.
The city of Jerusalem.
The Temple in the Jerusalem.
And, a God appointed king to lead them.
Yet, here they were in exile.
All they had believed in and believed to be true had been destroyed.
They had been conquered by the Babylonian Empire.
The ark and the commandment tablets were lost.
Jerusalem and the Temple were destroyed.
The king was dead.
They no longer lived in or on the Promised Land.
When all seemed lost and life was at its worst, the very real question they asked was this:
Had God abandoned them?
Out of that time of chaos and crisis of faith when all they had believed in was now lost and gone came these four words: And it was good.

And, here is where these words and this witness can become signposts for our lives.
Recall that time when your best laid plans fell apart. That time when even though you had done your best and done everything right life came crashing down around you. That time when you walked through what the Psalmist names as the valley of the shadow of death.
The diagnosis was grim.
A job was lost.
A loved one died.
You have been there.
I have been there.
We all have been there.
And, in that moment we are left to decide.
Will we become bitter and resentful?
Will we turn away or turn inward and let life dry up within us?
Or, will we find another way?

So, as we stumble our way forward on that journey we call faith allow me to suggest four words from the Bible around which we might orient our lives which, in turn, might help you find our way:
And it was good.