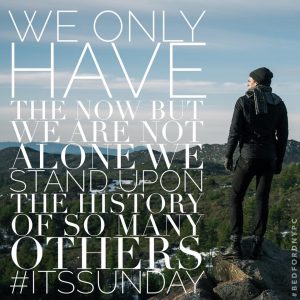 It is more than just history, I think.
The pictures. The artifacts. The reminders of days gone by.
Including those reminders which are a part of the times when we share the bread and the cup.
It is more than history. It is the shoulders we stand on.

It is the shoulders of the Rev. William Tennent, who moved to Bedford Village in 1720. After years of being a part of the Church of England, Tennent was the first Presbyterian minister for this congregation which had formed in 1681. He was an early advocate of independence from Great Britain and for the separation of church and state. He made this congregation Presbyterian. After his time here in Bedford, he moved to New Jersey where he founded the Log College which eventually became Princeton University.

It is the shoulders of the Rev. Ebenezer Grant. Who, in 1807, before there was such a thing as public education in the state of New York, served as the first President of the Bedford Academy, a school built for the community on land which had been given by the Bedford Presbyterian Church. That building is now the Bedford Free Library.

It is the shoulders of John Jay, the first Chief Justice of the Supreme Court who, when he moved to Bedford, worshiped here on occasion and who gave the silver tankard and plates and chalice which is on our Communion Table this morning. He also helped to start the Westchester Bible Society, a plaque commemorating that organization is in our entryway.

It is the shoulders of Francis and Susanna Palmer whose gift of $50,000 in 1870 enabled this sanctuary to be built. A free church meaning that the pews were free. You did not have to pay for your seat and any and all were welcomed to worship here. Since it was completed in 1872, how many people, I wonder, have sat in the space in which are sitting today to pray or to sing or to celebrate a wedding or baptism or to gather for a funeral? If you listen carefully, can you hear the echo of their prayers.

More recently, it is the shoulders of Janet Westcott who, in the late 1940’s, was one of the first women to be ordained as a Deacon in the Presbyterian Church. And, the shoulders of those who 25 years ago took a stand against the discriminatory practices of the Presbyterian Church which denied gays and lesbians full participation in the life and ministry of the church.

It is not just history, I think.
It is the shoulders we stand on.

And, there is this story.
While I cannot guarantee its veracity, I have been told it is true. I like to think that it is. One of the artifacts we have, which I am sure we will display again this fall, is the journal of the Rev. Peter Heroy who was the pastor here from 1857 to 1878. Two entries in his journal are of particular interest. The first is the date April 15, 1865 (Do you recognize that date?) when his entry is that the President (President Lincoln) had been shot. The second date is April 25, 1865 when he notes that he and his family moved into the new house. 1865.

That “new house” is now the 152 year old house in which Shodie and I live. In one of the downstairs rooms there is a built in bookcase with cupboard doors along the bottom. If you crawl in those cupboard doors and remove the back panel, which are children did when they were growing up, there is a space large enough to hold several people. Remember the age of the house and what was happening in our country at the time it was being built. The story is that that space, through the cupboards and behind the bookcase, was there to be a stop, if needed, on the Underground Railroad. A Presbyterian Church purposefully building a space to aid and to shelter runaway slaves.

It is about more than history.
It is about the shoulders we stand on.
In addition to being a place to pray and to worship and to sing and to learn, our story is also about independence and education and community and generosity and equality and inclusion and protection. A story about doing what is right even when, especially when, doing the right thing came with risks.
Values which link our past to the present.
Who we were then to who we are today.