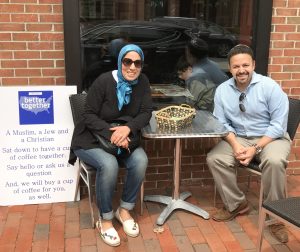 A Muslim, a Jew and a Christian sat down for a cup of coffee…

It was the second time we did this.
A Jewish rabbi.
A woman who is a member of the Upper Westchester Muslim Society.
And, myself.
With our sign.
In front of a local coffee shop inviting people to stop and to say hello and to introduce themselves to us. In exchange for that simple interaction we bought them a cup of coffee. All in all a simple gesture especially in light of the terrorist attack in Manchester, England. But, maybe simple reminders like this morning claw back some of our shared humanity.

The interactions were fascinating and wonderful.
Some people just walked by despite our offer of free coffee.
A Hindu man stopped and had a long conversation with us.
Another person bought us each an orange.
Several people asked if they could take our picture.
Someone called the local paper to tell them what we were doing.
One woman thought our offer of free coffee was being too pushy.
A couple people asked what organization we were representing. We responded saying, “No organization. We are just friends who happen to practice our faith differently.
But most who passed by on the sidewalk or who walked into the coffee shop and who read our sign or stopped to say hello simply smiled and said thank you.

And, that was enough.
More than enough.