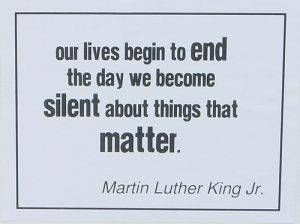 You have probably already seen or heard the headlines.
A group of teenage boys taunted an older man at an event in Washington, DC.
Yes, the man who was taunted is Native American.
Yes, he is a Vietnam War veteran.
On one hand that matters.
On another, it doesn’t.
What gives any person the right to treat another person that way?

A whole host of issues are wrapped up in what happened.
Stupidity.
Ignorance.
Racism.
Tacit permission that such actions are okay.
There will be consequences.
Their names are known.
To their school.
To their communities.
To their friends and classmates.
To their parents.
Their community and school have already issued apologies.
It doesn’t make it right, but those young men were only doing what they have seen adults around them do. Including a number of our elected officials who occupy the highest seats of power in our country. They had been given permission to act the way they did.

But, there is another aspect to all of this which troubles me.
With all the other people who were there no one spoke up.
No one stepped in.
No one said, “Stop it.”
I wonder about that.
I have been to the Lincoln Memorial.
On a normal day, let alone a day of a rally, I have a sense of how many people are there.
There had to be, at least, one person who saw what was happening and was angry and ashamed at what they saw. My guess is there were many.

Here is what I find myself thinking about.
Those of us who think what those young men did was wrong can no longer just shake our head and walk by. We have to find the courage and the will to step forward and to speak up.
Not just one or two of us.
All of us.

Update: The events at the Lincoln Memorial were more complicated and nuanced than first reported. Please take a moment to read this article from the New York Times. And, here is the statement by the student seen in the videos.