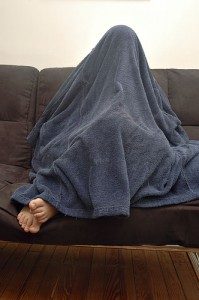 I spent Monday morning playing with my grandson. We sat in his bedroom hiding under a blanket. I would make up a story about where we were hiding and the people who were looking for us. When I ran out of story I would say “When I count to 5 we will come out from under the blanket and surprise everyone. Then I would begin to count. 1. 2. 3. 4. 5. When I got to 5 we would throw off the blanket and shout Surprise to no one else in the room. Immediately he would say Again. We would cover ourselves with the blanket and the story would begin again. The only difference was where we were hiding. In his bedroom. At the zoo. At his school. Going for a walk.

I was making up the story, but his imagination was running wild.
Hiding from people.
Being at the zoo.
Watching the people walk by on the sidewalk outside his home.
Suddenly appearing to the surprise of everyone around him.
When did I lose my ability to imagine like that?
Replacing what might be and only seeing and focusing only on what is?
The work which needs to be done.
The deception and dysfunction of our politics.
The headlines in the news.
Maybe I need to recover the imagination of a 3 year old who can see beyond what I can to that something more. Maybe if I can recover that way of seeing I will be able to find a way from here to there.