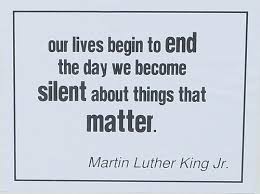 I know many of those who are posting their prayers.
And sharing their heartache and heartbreak at another senseless slaughter.
But they…
We…
Are the small voices.
Yes, our voices matter.
And, yes they make a real difference in the communities of which we are a part.
And, yes, when added together they can begin to turn the tide.
I live holding onto that hope.

The faithful, little voices around me are speaking up.
And speaking the truth.