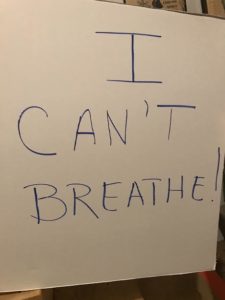 On Sunday, my wife and I participated in Black Lives Matter rally in a neighboring town.
Most of the hour or so we were there was spent standing with our signs doing our best to make eye contact with those in the cars which drove by.
Some honked.
Some gave us the thumbs up.
Some stared straight ahead.
One gave us the finger.
As our hour was wrapping up, the leaders walked around and told us in a moment we were going to move into the street and stop traffic for 8 minutes and 46 seconds. The signal was given. Most of the group moved and knelt down in the street stopping traffic.

It was then time slowed down.
We were kneeling with our signs in front of us.
“Two minutes.” the leader called out.
It had already felt like ten.
Then, as I was sure we were getting close to the eight minute mark, the leader shouted out “Four minutes” as a truck drove down the sidewalk to get around us then stopped, yelled at us and called the police. At the seven minute mark, which had begun to feel like 20, the police arrived. The first officer realized what was happening and let the group count down the remaining 60 seconds or so telling his fellow officer we were honoring George Floyd and it was okay.

After eight minutes and 46 seconds
(or was it longer?)
we stood up and moved back to the sidewalk.
The cars that were lined up began to move through the traffic circle.
We did our best to say “Thank you for your understanding and patience.” as cars passed by.
Some drivers understood and acknowledged us thanking us for what we were doing.
Some drivers looked straight ahead doing their best to avoid our eyes and our signs.
One driver opened his window and said,
“All this just undid the point you were trying to make.”
For 8 minutes and 46 seconds he had to wait.
In his car.
On a nice day.
In a beautiful Vermont town.
Then he was on his way to do whatever it was he had chosen to do.
But now upset because he was inconvenienced.
8 minutes and 46 seconds.
Two songs on his car radio.
The time between commercials as you watch your favorite TV show.
The time it takes me to get in my car and to drive to the grocery store.
8 minutes and 46 seconds.
Kneeling on the pavement.
Holding my sign which read “I can’t breathe.”
Feeling like time had slowed down.
Even stopped.
8 minutes and 46 seconds with a knee on his neck.
And George Floyd was dead.